On the 25-26th of July our horses participated in the first Arabian Horse Show to be held in Sopot. BACHMAT PA was chosen Junior Gold Champion Stallion, while POKER PA placed third in the yearling colts class. 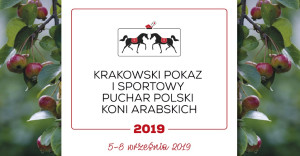 The Cracow Arabian Horse Show, held in Michałowice, brought our horses as many as three medals.

PRASADA PA (Empire - Palatina/QR Marc) placed second in the yearling fillies class (A series) with a score of 91,5 pts and was awarded with the Yearling Fillies Silver Medal.

The third medal (yearling colts bronze) was won by PETRUS PA (Ekstern - Piwonia/Kahil Al Shaqab), who qualified for the finals from second place in class with a score of 90,9 pts.